The Life Of O’Brien

This shot of Conor J O’Brien was taken on Gordon Street, Belfast on Sept 10, 2010. He had just soundchecked at the Black Box and I’d interviewed him for my Radio Ulster show. The ‘Becoming A Jackal’ album was four months old and was already imprinted in my soul. I was reading Herman Hesse and wiring up my own connection between Steppenwolf and the Villagers’ story of lupine dread and alienation. I was quite lost. No point in trying to say this much to the author. He had heard many other compliments and was playing it courteously. 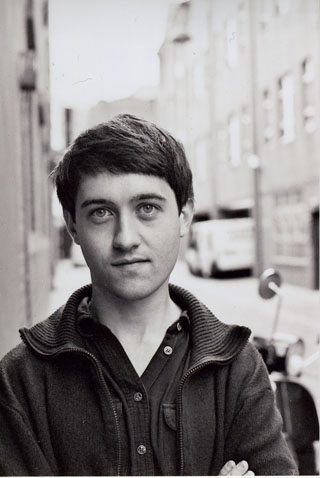 We had met briefly in 2006 during his time with The Immediate. I liked their album ‘In Towers And Clouds’ but it was over-fussy and too many heads were involved. The live shows were turbulent but not always in the best sense. I guess I must have seen him perform with Cathy Davey but I became a proper fan at sxsw in March 2010 when he seemed to materialise at potent moments, singing about lonesome vigils, rituals, zombies and exile. Elsewhere on Austin’s Sixth Street, there was mass fakery and music with little heart. Meantime Conor was there with his battered Spanish guitar, singing a quiet, true commentary.

Our Belfast interview was ok. But when I probed him about the track ‘Home’, he was evasive. I felt it was loaded with ideas about Ireland, about the mythologies and treacherous directions. Conor blinked and told me that wasn’t the case at all.

Two years later and he was at a party in Glasgow, a few sheets to the wind and talking to an associate of mine. And he made this weird confession, that I had been right about the song but he had been “fearful” when asked. He remembered back to when he was a suburban kid, trying to externalise his thoughts, feeling separate from everything, lacking in spirituality or stability.  “I had to invent my own feelings”, he mused. Yet when he heard about the conflict up north, he was detached from it.

In the song ‘Home’ he explained, he was imagining being a child in the back of a car, innocent to centuries of poisoned history. “Children’s points of view are more interesting than adults,” he continued, adding that the old points of view about Ireland are like metaphorical grown ups. Conor labored this idea for a bit before making an indirect apology to myself for fudging it all in Belfast. Too much history, and the context, he said, had been overwhelming.

The photo was taken with a vintage Olympus OM1, with a 50mm lens. Simple Seventies kit, manual operation, cheaply purchased on ebay. The camera of choice for the wondrous Jane Bown, who merits a gushing blog entry, soon.