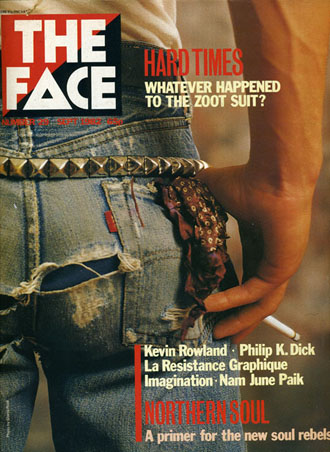 I’ve thrown out most of my old magazines, but this one’s a keeper. It’s an issue of The Face magazine, September 1982. By then, the publication had been on the stands for two years, revving on street culture and post punk confections. We were urged to wear zoot suits and Westwood, pirate chic and kamikaze prints. Music was headed out of the rock venues and into bespoke clubs where the DJ ruled and style was all. Here was a mag to pilot the transition.

Some of it was dreadful, but The Face expressed the verve of the time. You can see the first 50 covers here, and appreciate how they took a steal from the NME and the other newsprint inkies. A decade before, Nick Logan had steered the NME from a trade paper into a music weekly with attitude. Then he established Smash Hits, bringing mirth, wit and irony to the pop kids. But The Face was a different mission as Logan invested his own savings, set up in a little office on London’s Mortimer Street and evolved his vision away from the corporate houses.
Subculture was the story, yet by 1982, Boy George had graduated from his Warren Street squat to the top of the charts. A load of the Blitz club regulars were scoring record deals and pouting for the video directors. There’s a Dave Rimmer book called ‘Like Punk Never Happened’ that charts the cynicism of this moment. No point worrying about selling out when there was the modified concept of “selling in”, getting your money’s worth. All of this provoked a minor crisis with The Face and so Issue 29 was about Hard Times.

I’m smiling as I read it now. The magazine was embracing poverty as a style option. The revolution was going to wear espadrilles and ripped jeans. The soundtrack would be Gil Scott-Heron and The Valentine Brothers, while the faithful would groove at The Beat Route, The Dirt Box and the subterranean  warehouse parties. And so the cover image was a Sheila Rock photo of a pair of distressed Levis 501 XX jeans, accessorised by a studded belt and bandana.

Camp as anything, really, but at the time, we thought it was the best. Even in Belfast, we took the pose, bought more old funk records and ripped the sleeves out of our flannel shirts. We certainly mocked that cover story by Robert Elms (“gay abandon has evolved into a clenched teeth determination where precious lager cans are cradled to stop them disappearing and sweat has replaced cool as the mark of a face”). But hey, Robert was living in a converted fire station in north London with his girlfriend Sade, so what were we smirking about? And when Elms later informed us that the only Levis that mattered had red selvedge from the original US looms, then we went shopping to Flip and American Classics and purchased the vintage method.

The rest of Issue 29 holds up well. James Truman reporting from New York and Julie Burchill on political scandals. A retrospective on the recently departed Philip K, Dick plus French graphic art. The Face was enthusing about Grandmaster Flash, Soul Sonic Force and Set The Tone, remembering Northern Soul and dealing with Dexys and their dungarees. Design by the impeccable Neville Brody and even now, I’m a bit excited. It was ace.