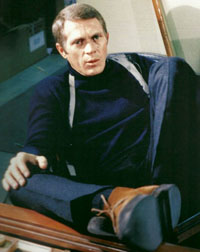 Steve McQueen was a famously tough guy with a daily two hour exercise programme. He had a wiry presence and the stamina to take on the film work with the stunts and the intense car scenes. But there may have been a particular weakness. McQueen had “delicate feet” according to John Rushton, the footwear sage of Wimpole Street, London.

The solution was to wear chukka-style ankle boots. Suede uppers in a wraparound style with a plantation rubber crepe sole. Two eyelets, tobacco brown. Steve wore them on several films, notably Bullitt, but they also featured on The Thomas Crown Affair and even Papillion.

Steve dressed with care. He favoured the Ivy League look with the crisp shirts and East Coast tailoring in the Brooks Brothers tradition. It had been the default attire of the Madison Avenue set and the affluent college boys, but Ivy League had gone west where it was adopted by the immaculate jazz players and TV actors like Effrem Zimbalist Jr on 77 Sunset Strip.

Steve had served in the armed forces, and so he also carried this look. In The Great Escape, the Cooler King took some license with army issue – his chinos were perfectly tailored – but the M-43 Type III boots and the A2 horsehide jacket were authentic enough. And like the endurables of his generation, he could wear the T-shirt with grace. 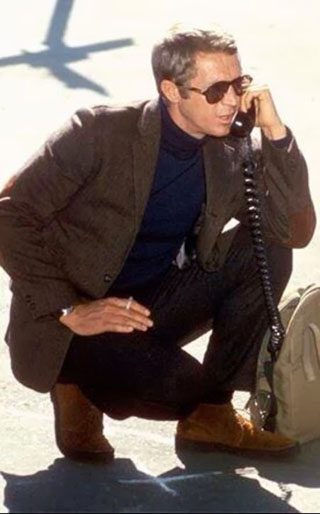 Yet his chukka books were English. Students of McQueen have debated this in detail and there is no definitive answer. The style seems to have developed in Northampton as the Eton Playboy or Clubman. You can buy something that looks similar from Sanders and there are more affordable tributes from the likes of Delicious Junction. But the connoisseurs believe that McQueen wore boots made by Hutton. The company subsequently folded in 1990 but the brand has been revived and their late celebrity client is a marketing bonus.

Lieutenant Frank Bullitt worked for the San Francisco Police Department and drove a Ford Mustang GT 390 Fastback in Highland Green. He gunned that V8 engine to 115mph in pursuit of Chicago hitmen in a fierce chase around Fisherman’s Wharf, Russian Hill and Guadalupe Canyon Parkway. It’s one of the best-known car chases in film, stunningly edited. The cop wears a blue cashmere turtleneck and a tweed jacket but the composure is set to chill.

The Bullitt look was put together in the 1968 production by Doug Hayward the tailor and the costume designer Theodora Van Runkle. That said, McQueen was wearing similar clothes five years before the filming, so his own signature was there. The herringbone jacket with the notched lapels and unstructured shoulders is distinctly Ivy League, but the side vents and flap pockets are English. Likewise with the elongated elbow patch on the left sleeve, a pragmatic design for rifle shooting excursions, down and dirty.

Charcoal worsted trousers and a fast draw holster complete the ensemble. Since much of the action takes place at the weekend, the Lieutenant has put the navy suit aside. The task is witness protection, keeping Johnny Ross safe from the mob. But the situation is twisted and Bullitt’s charge is shot down at the Hotel Daniels.

Yet the Lieutenant will not tolerate the set-up. The District Attorney is Walter Chalmers (Robert Vaughn) who favours a shifty method. “Integrity is something you sell,” he hisses. But Bullitt looks at him with the blue, undimmed eyes. There a similar response when his girlfriend Cathy (Jacqueline Bisset) realises the brutal nature of his job. “You’re living in a sewer, Frank.”

Elsewhere in pop culture, hair was long, drugs were plentiful and the music was fried and electrified. In 1968 The Rolling Stones were singing ‘Street Fighting Man’ and the French students were having a riot of their own. Frank Bullitt may have looked square, but he was anti-establishment after his own classic fashion. He did not submit to The Man. Unlike say, John Wayne, absurdly gung-ho in Vietnam with The Green Berets that same year.

This is one reason why Steve McQueen and Bullitt style continues to resonate. The actor’s role has been superimposed into car adverts for a Ford Puma in Europe and a Mustang in America. Knock-ups of the clothing are readily available and what purported to be the original jacket sold in a 2014 Bonhams auction for $120,000.

There’s a restaurant-lounge in Shoreditch London called McQueen and a hotel in Belfast called Bullitt. While you’re at it, you might order the Lieutenant’s watch, a Benrus Series #3061 that’s inexpensive compared to regular McQueen wrist wear by Rolex and Heuer.

With unlimited funds, you can wear it, drive it, eat in it and maybe sleep there. Bullitt is superficially attainable. But only one guy walked in those boots and was so utterly, timelessly Frank.

The King of Cool