Ubu The King – The MAC, Belfast

Ubu is a hairy arse-crack, a chancer, an upsetter and a bin-hoker. Ubu is engorged and filthy, an opportunist who grabs the crown, trades in filth and reads his manifesto from a bog roll. Ubu is a parade of infantilism and id – literally and theatrically, a shit in a box.

Ubu Roi by Alfred Jarry was first staged in Paris in 1896. It carved up Shakespeare, prompted uproar and absurd theatre. There was mention of Polish-Russian wars and some of the corruption of the day but the message is ever pertinent and it absolutely resounds now. You can see Ubu in the White House, posing by a table of cold, larded burgers. It’s no great stretch to hear Ubu proclaiming a strong and stable kingdom. At the MAC, he says he wants to make pastries great again.

This version is set in a patisserie and the cast members wear hairnets and white coveralls. So does the audience who sit around the ledges of the set. Food products are flung around while the employees shout and letch and connive. Ubu takes his moment, rules abominably, sets off a war to distract the populace and is dispatched with a kitchen implement in his ass. 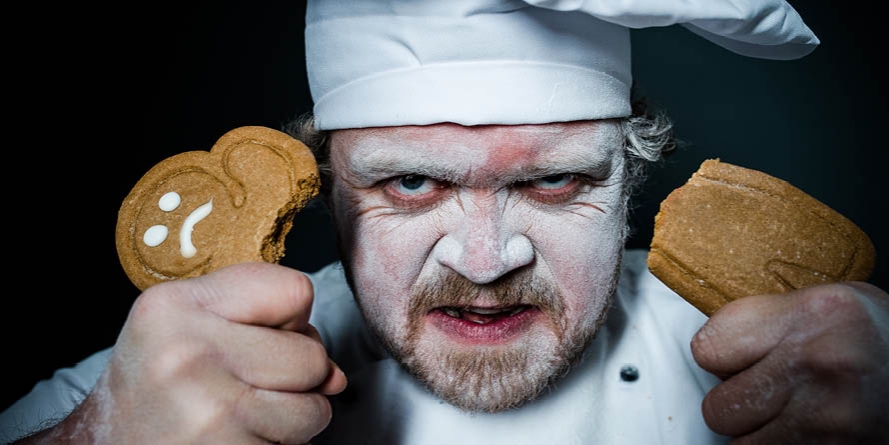 The allegory makes you wonder if there might be a similar ending to our own political bun fights. Rhodri Lewis makes capital out of the lead role, the lurching slapstick, essence of King Leer. His corpulence is vital for the anarchic moves and his voice is brute enough to carry over the kitchen clamour and the soundtrack. Unfortunately other cast members struggle to match that effort. There are many moments when the reverb of the venue sucks away the words and the payoff. There’s a tendency to slightness and misplaced rhythm when it ought to be whole-heartedly wrong. Blame it on the cacca-phony.