There was a pause in the funeral for Lyra McKee and then two singers stepped up: Morgan McIntyre from Belfast and Gemma Doherty from Derry. They were known as Saint Sister, two exceptional voices. At Saint Anne’s Cathedral, their work was to perform a song for Lyra called ‘Dreams’.

This had been written by Dolores O’Riordan and released by The Cranberries. It was a song about letting go, about the rush of early love and the vulnerability that comes with that. Dolores had sang about change, about the moment between childhood and the adult life, stepping into something new. It was the band’s first proper release in 1992 when Dolores had often been regarded as an innocent abroad, lost in the pop world that routinely mocked her. Later we found out that she had been the victim of sexual abuse, that the dreams she aspired to had been painfully won.

The song was on the soundtrack to Derry Girls, another rite of passage, about a city coming out of conflict and into the future. And so all those echoes were around the funeral. The sentiments were now arranged around the character of Lyra – her curiosity, wit and good humour and the social obstacles she had beaten. But like Dolores, her prospects had ended too soon. Again the song was about youth, interrupted. 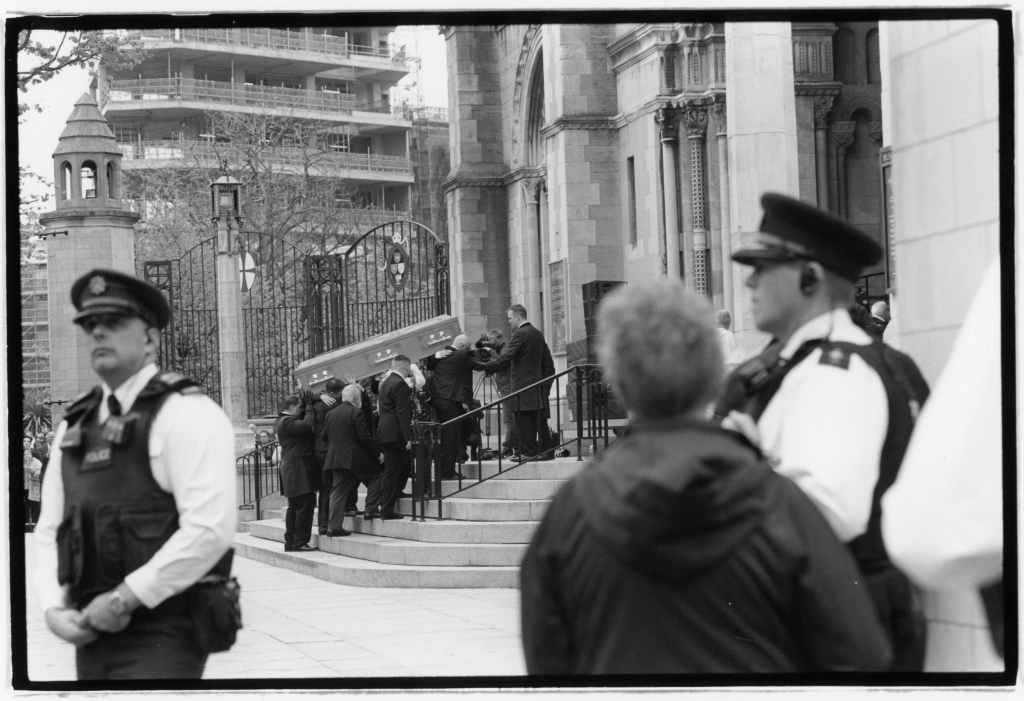 Stephen Lusty spoke about his friend’s unrelenting style. She had not been swayed by tradition. She rated JK Rowling above Shakespeare. He said he had talked to her about punk, even though it had been way before her time. But still he recognised a connection and he framed her against a famous Belfast declaration by Stiff Little Fingers in 1978: “She showed us what it was like to live in an Alternative Ulster.”

When Stephen spoke and Saint Sister sang in the cathedral, the loss was sorely felt. The dignitaries inside were caused to reflect and there was manifest hurt outside as hundreds of people stood in their Love Equality shirts, in the Team Lyra and Hogwarts colours, rainbow hues and other varieties of outsider culture.

Presently there was a resolve to honour those dreams. It was about political leaders being called out, all the more loudly. It was about painting over the old murals of the past and defacing them with handprints of ersatz blood. Soon after, street artist Emma Blake sprayed up a new mural of Lyra at the corner of Union Street in Belfast, adding her emphatic quote about how things were going to get better. 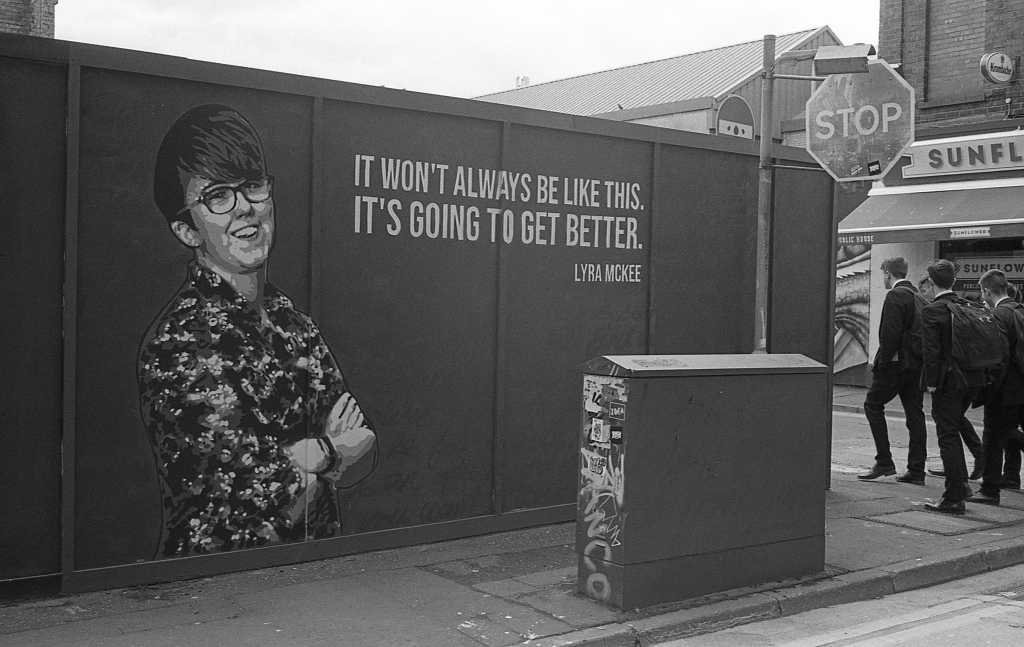 Derry musicians were most vocal in their rejection of the killing. Cherym, Wood Burning Savages and Susie Blue noted their disgust on social media. The artist SOAK was also moved to comment near the end of her homecoming gig at the Brickwork, just ahead of a new song, ‘Missed Calls’.

“It’s weird playing in Derry tonight and being so happy, to be here in front of my friends and a lot of people that are very close to me – whilst there was such an awful tragedy that happened recently. We would like to dedicate our whole set to Lyra McKee. It’s just immeasurable the impact that she could have had. The words were s beautiful and I’m so sad that they’re only known by people now.”

There were new songs. Michael Mormecha and Amy Montgomery recorded ‘Lyra, Live In Your Art Forever‘, based on the words of a Facebook post by another artist, Paddy Nash. Meantime Matt McGinn delivered ‘Lyra‘. The songs were written in haste but freshly engaged. At the Marriage Equality march in Belfast, May 18, Lyra’s loved ones walked at the front of the parade and then Susie Blue stood on the flatbed stage and sang ‘People Like Us’. She was nervous but soon fixed on the song’s sense of outrage and the hundreds of paraders carried the song across Donegall Square. 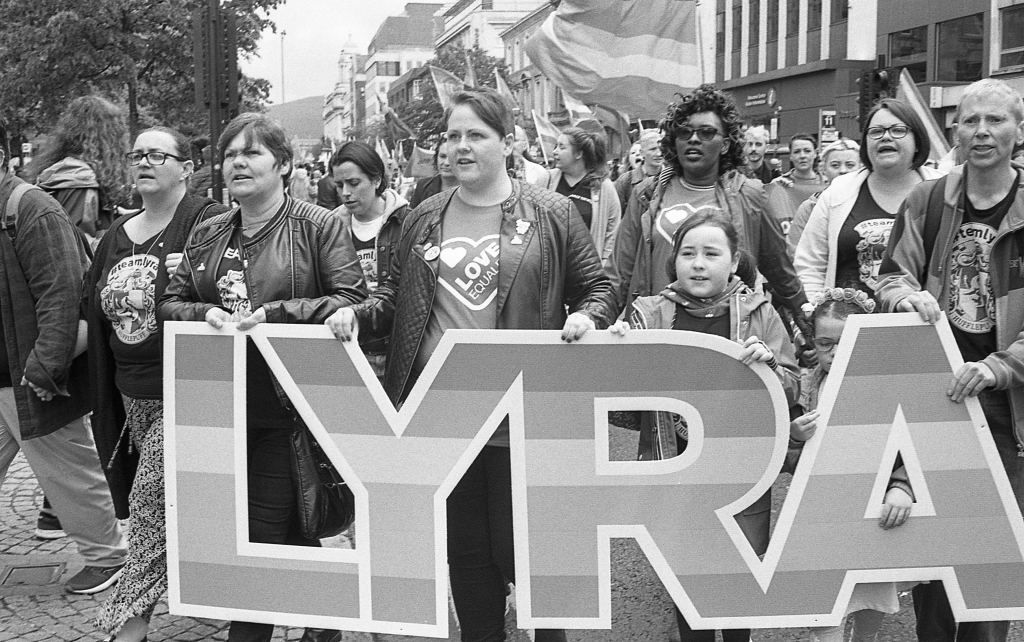 Also there had been singing at the Guildhall in Derry. Citizens stood in the rain and came together in the chorus to ‘We Shall Overcome’. It was a flashback to the Civil Rights march in Duke Street 1968 and to Selma, Alabama. It was a time to reflect on what had been achieved, what had been lost, and the job of work that was unfinished.

The momentum sustains and May 25 is set for Lyra’s Walk, from Belfast to Derry. A three day procession with camping at Randalstown and Dungiven. Arrival at Guildhall Square scheduled for Monday at 4pm with a choir and recognisable faces and voices hauling together. How long, to sing this song?

(information about Lyra’s Walk is here).