There’s a first aid tent in the campsite at Moneynick, County Antrim. Here the damage is assessed. Blisters are lanced and drained and strapped up with zinc oxide tape. It’s the evening of the first day of Lyra’s Walk and Compeed plasters are getting rare. Also, toenails are starting to pop with the pressure. More than 70 people have taken part so far and those who covered upwards of 25 miles are taking off their wet boots and having a good wince.

This was always likely. The walk from Belfast to Derry is a difficult haul of 70 miles over three days and many of the people who have enrolled are not road hardy. Yes, there are veteran trekkers with Nordic ski poles and others that have covered the full Camino. But the occasion has brought out many others, liberated from sofas and barstools, expecting to manage the distance on grit and a shared sense of mission. 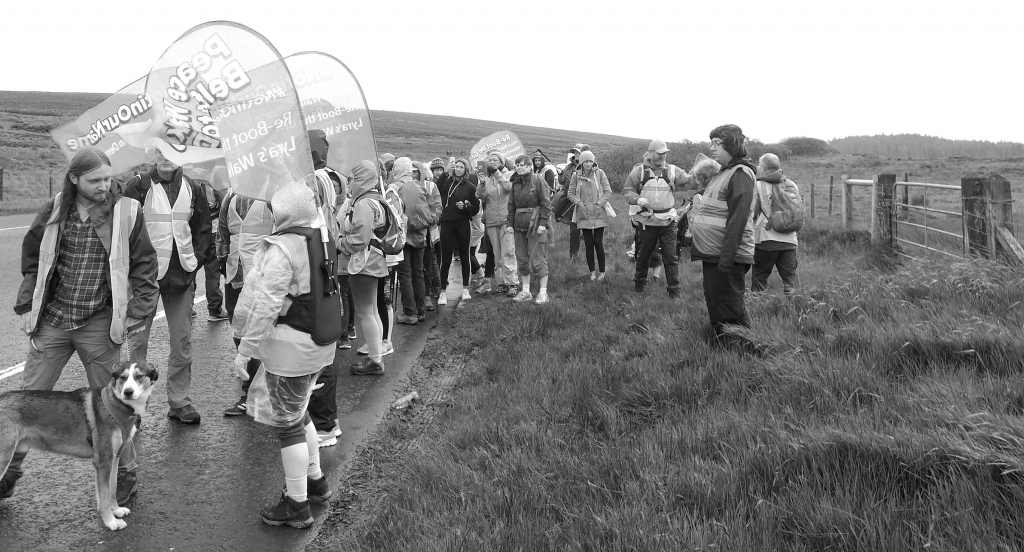 Collectively the walkers have been moved by the death of Lyra McKee, killed by a paramilitary gun in Derry on April 18. Everyone on the road has a different response to this but the shared denominators are frustration and sorrow. Lyra was 29 but she had already shown flair and form as a journalist, writing about politics, LGBT issues, mental health and youth suicide. She had aligned herself to the post-ceasefire experience in Northern Ireland and in the funeral speeches we learnt of her precocity and soul – qualities we wanted in our busted, back-sliding society.

So Lyra’s Walk is a follow-on from the vigils, the funeral and the Marriage Equality march in Belfast that was headed by her partner Sara Canning and the formidable Team Lyra. It develops from a protest about a killing into a rolling gesture over the hills of Antrim and Derry, drawing attention to a stuck political process. And magnificently, the road draws out stories, camaraderie and resolve. 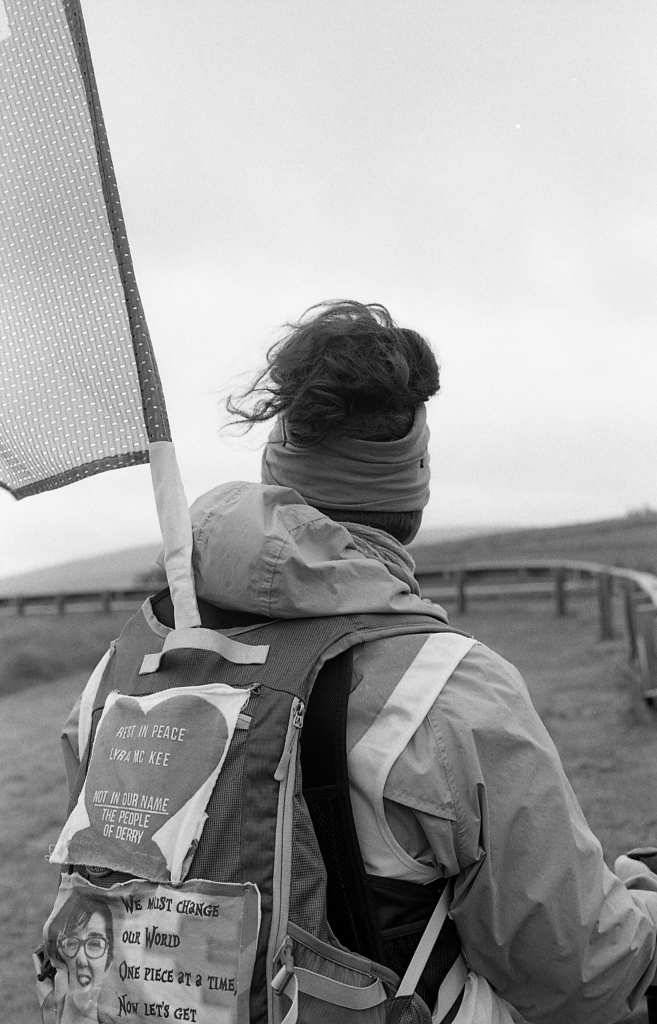 The march mascot is Oscar, a cross between and Husky and a Border Collie. He loves the adventure and he minds the pack. Our company includes a retired paedatric nurse and some teachers plus Tom, who turns 18 on the first day of the walk, May 25. He gets his first legal beer but that’s the limit. There is former military with us and the group may also feature ex-paramilitary. Somebody is carrying a copy of the Good Friday Agreement – a totem of how things were meant to be. Ahead of the event, Sinead and her friends had taken the bus from Belfast to Derry so they can walk home with us, in solidarity. Our wardens include the Green Jackets, perfumed in reefer smoke and determined to achieve Billy’s Law – allowing medical cannabis for the teenage Billy Caldwell and his severe epilepsy. They wave and converse with the police outriders and everything is swell.

The hospitality is also a bonus. Strangers applauding and children giving over their Haribo. Sandwiches with coffee in Antrim and a fruit supply in Randalstown and then a sore trail to the campsite by the mill in Moneynick. The grass has been cut in readiness and once the feet are tidied up, we sleep surprisingly well.

Sunday is tough because the newness of the walk has gone and the joints are not always forgiving. More positively, everyone’s been talking and riffing and in this rarefied state, they are bonding at speed. There is talk of family and love, resistance and new fixes. Some have put away religion and a few believe they have found spiritual insights. Dee is a Republican lesbian with bad knees and corrective surgery on her spine. She is emphatic that she will finish the walk. There is no faltering. Passing cars hoot and passengers watch the damp progress of the dog, the child in the stroller and Betsy, the documentary film maker from California who mostly walks backwards with her camera. The energy flow is difficult to explain but it lifts and sustains.

The police have decided that the first incline at Glenshane is too dangerous with the speeding cars and uneven ground. Likewise with the M2 roadworks nearby. A few walkers are unhappy that they will not complete the full distance but others are fine with a brief coach journey. The walk is still going to amount to well over 60 miles, so we get fortified on hot drinks at the Ponderosa and contemplate the walk into Dungiven.

The talk is not always lofty. There’s a discussion on the best treatment for chafing. Vaseline and Sudofed have their supporters. One tough contender did not avail of the first aid tent on the first night and instead treated his feet with electrical tape and super glue. Apparently the later was used during the Vietnam War to create battlefield sutures. This is handy information and there’s amusement in the talk, but we also appreciate that our walk is short term, unlike the thousands of refugees who have had few other options.

We get fed and encouraged at the St Canice’s GAC club in Dungiven. The changing rooms have showers which provide simple joy. There’s the option to camp at the side of the pitch which many accept, but residents are also offering to put up visitors in their homes. Then onwards to the Glór Dhún Geimhin on Main Street and a panel discussion set up to accompany Lyra’s Walk. The theme is ‘Having Difficult Discussions’ and that’s how it unrolls.

Most of the speakers are tuned into reconciliation and fresh starts. Richard Moore met with the soldier who had blinded him with a rubber bullet when he was 10. His mother, who had also lost a brother on Bloody Sunday, served the squaddy and her son tea in her home. Jo Berry’s father was killed in the Brighton Bombing but has come to know the instigator, Pat Magee. From East Belfast, Linda Ervine talks of pluralism, the Irish language and relegating the stories of old men that glorify the conflict. Kathy Wolff’s soldier husband killed himself and now she commits to cross-community work. The Rainbow Project is represented by John O’Doherty who talks of stress, legal disconnects and the Lyra mandate.

Michael Culbert does not exactly meet with the consensus. He is Director of Coiste na nIarchimí, that provides services to Republican ex-prisoners and their families. He talks about the armed group that shot Lyra. He calls her “that woman” and opens up a different line of enquiry. “Were Saoradh invited here tonight?” he asks. “Personally I would have loved them to have been here – for me to put my logic and my view on what they’re doing. They’re the difficult conversations.” He talks of the “dominant narrative” and compares Team Lyra to the Peace People, founded out of tragedy in 1976. He denies the “condemnatory thing” and suggests that both movements are short-term reactions, used to attack the Republican ethos. There are noises from the audience. Some reports say that Sara walks out of the room.

It is Lyra’s sister Nichola who concludes the meeting from the floor. She reminds the gathering of her sister’s line, “failure is not an option”. She reckons that Lyra would have seen this event as an opportunity and respected everyone’s view. “My sister was killed but she’s not dead. Her spirit lives on.” 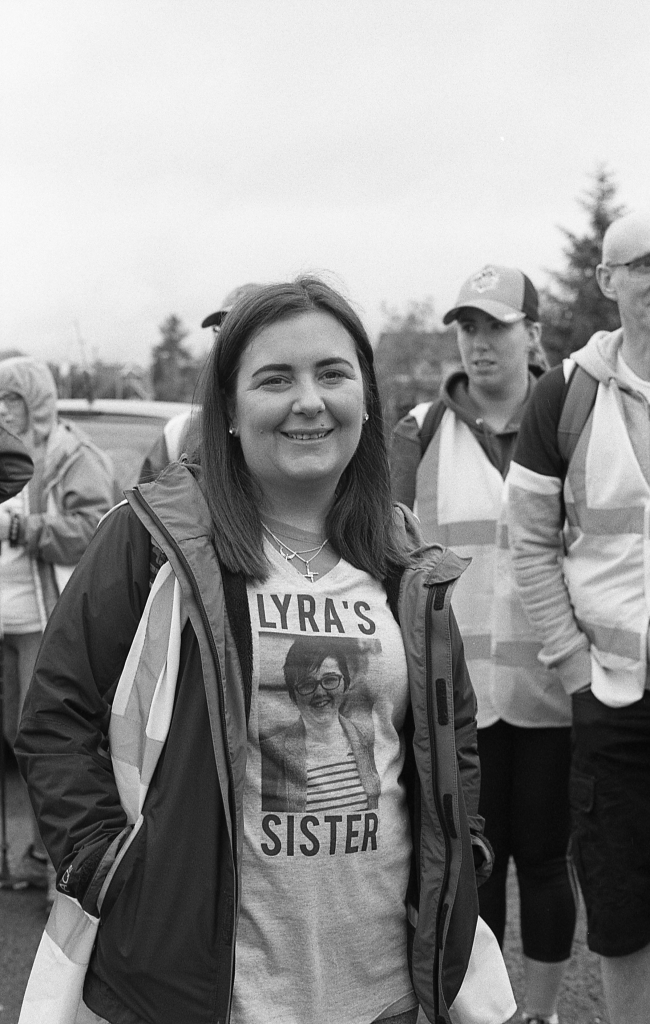 Monday at 7.30am in Dungiven and the camping gear is stashed into Martin’s van, headed for Derry, 18 miles away. The GAA car park is swelling with new walkers and the loud hailer carries instructions from our logistics people: Brenda, Séimí and Connall. The walk’s creator, Susan Curran is a quiet presence. So too is another of Lyra’s sisters, Mary. Her tent was flooded the previous night but she’d managed some sleep on a bench in the changing rooms. “It’s been very emotional,” she concedes. “Everyone has come forward and given us support. It’s a good cause. We’re walking for peace at the end of the day. The generosity of everybody is overwhelming. It’s just… unreal.”

Progress on the final day is hard. It rains down for much of the duration. The line of walkers starts to stretch out as the fitter participants lead the pace. Breaks are taken but the feet are more painful once you’ve taken a load off. Still we feel elation at the prospect of arriving in Derry, and a deal of separation anxiety also. This amazing thing will shortly be over. Some of us spend time alone, getting into a rhythm that denies the discomfort. We see the high rise of Altnagelvin Hospital through a gap in the landscape. Now it’s euphoric.

We pass over the River Faughan by Burntollet, where the 1969 People’s Democracy march was assailed by wooden clubs and rocks. A strange flashback. But in Drumahoe, Sara and her mates stand outside the YMCA with the big LYRA sign. Inside they’re providing bags of chips and excellent cheer. Scores of people are joining the march now and the organisers ask that the three day vets should lead the final miles.

Battered walking poles are discarded and waterproofs are removed. A biker club provides an escort and the car horns are giving her Dixie. The smiles on the Craigavon Bridge are immense. We can work out the significance of it another time. For now, it’s miles measured and two cities covered. Dee makes it over the River Foyle and all of the pain has dissolved. “With a broken back and broken knees, this is the beginning of the change,” she figures. “I’m so proud of every one of the ordinary people, coming together. We will always keep Lyra McKee in memory.”

In Guild Hall Square, the choir sings ‘People Have The Power’, the Patti Smith song about visions and belief and collective might. We give in to the sentiments about the leopard and the lamb, shining valleys and fountains. Tears roll and hands are raised. It is decreed, that people rule.