We see New Pagans on Day Two of Stendhal. They play ‘It’s Darker’ as the temperature drops. And then the festival thing happens, when a big stage and a keen audience connect with music that’s ready to assume gigantic proportions.

You might well know the song already. ‘It’s Darker’ is righteously upset about a put-down at a party. It rages about the discourse of the nasty. And it wins, because New Pagans are opposed to the snide remark, the reductive thought and the way of the bigot. They respond with noise and intelligence. It’s the greatest roar, a denial of darkness. 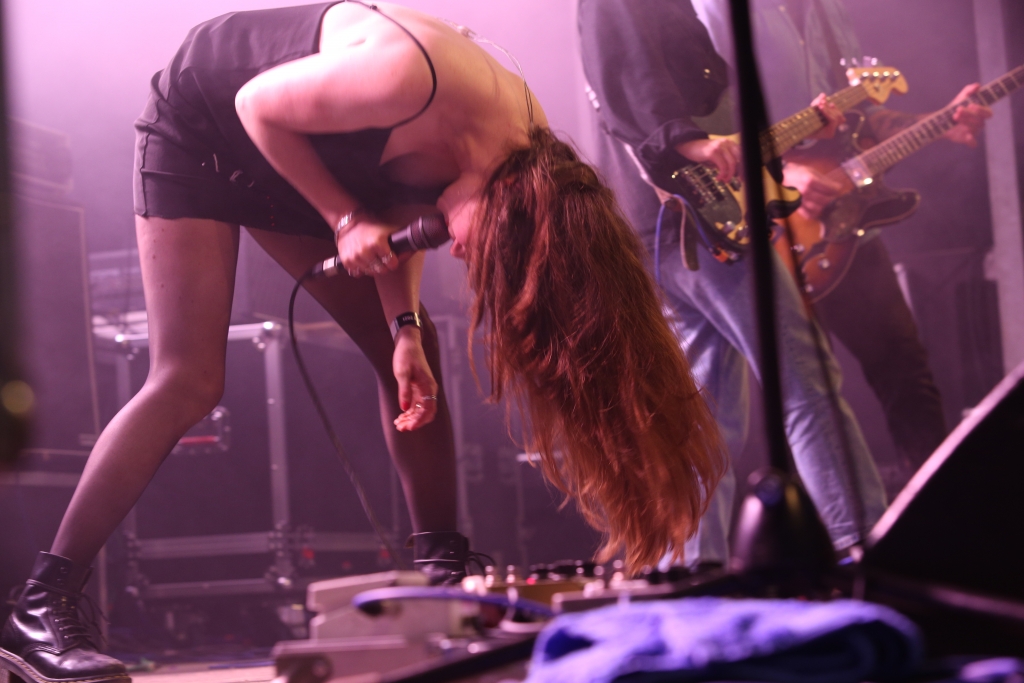 We have little time to absorb all this because now they are playing ‘Lily Yeats’ and Lyndsey is fixing on another troublesome issue – the relegation of female artists, the write-offs and the repression. Again, the volume rises and although the players may look nonchalant, they are acutely in synch. Those guitar crunches plus the stop-time and the moments when everything flies at once – none of this is accidental.

Therefore Lyndsey is secure with the band and it allows her the liberty to inhabit every microsecond. She sings in the present and relives the outrage. Importantly, because she grew up in a home where popular music wasn’t condoned, she came late to the tunes and isn’t bound by the grammar book of rock moves. It’s all fresh and astonishing.

‘Christian Boys’ is the greatest song of the night. It pivots halfway through as if any proper consideration is wasted on these loathsome figures. And so New Pagans summon up the bulldozers and they do the demolition. Lyndsey folds herself on the floor by the bass drum. There’s no why. It’s just pure feeling, foetal attraction. Such an event. 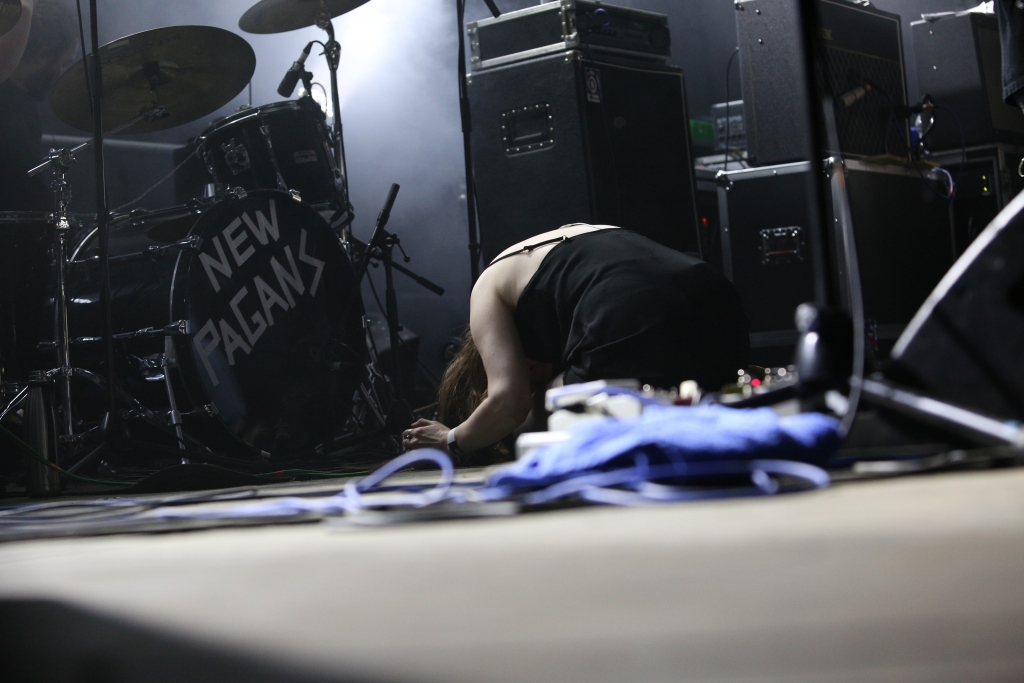 The Saturday plans for Stendhal have also gifted us the lightness of Laytha, two sure voices on ‘What Will I Gain’. The song considers family, hopes and a place to belong. Dolores O’Riordan is smiling, somewhere. Another tune, ‘Strawberry Moon’ was completed after a drink-fuelled Zoom quiz but you might believe that it came from a lakeside walk by Windermere. Laytha also support the Free Britney movement by playing ‘Oops!… I Did It Again’, with feeling.

Cherym put down vital songs at the get-go like the best poker sharks. No reason to deny ‘Listening to my Head’, ‘Take it Back’, ‘Pretty Boys’ and ‘Telepathic Kelly’. They provide the jokes, the hair and the commentary. As with many bands, there is a slight wobble at the start, like an ex-cyclist returning to the saddle. Eighteen months off, y’know. And then it rolls on, headed for glory.

Sasha Samara does the Wooly Woodland Stage in a taffeta ball gown and hiking boots. All contingencies are covered. The uke sounds deadly and there’s a transformational air about Sasha’s style. She’s no longer regretful and apologetic. The daisy-shaped guitar goes out of tune but it does not detract. She jokes plenty and ‘Sobering Up’ is a throwback to more troubled times. 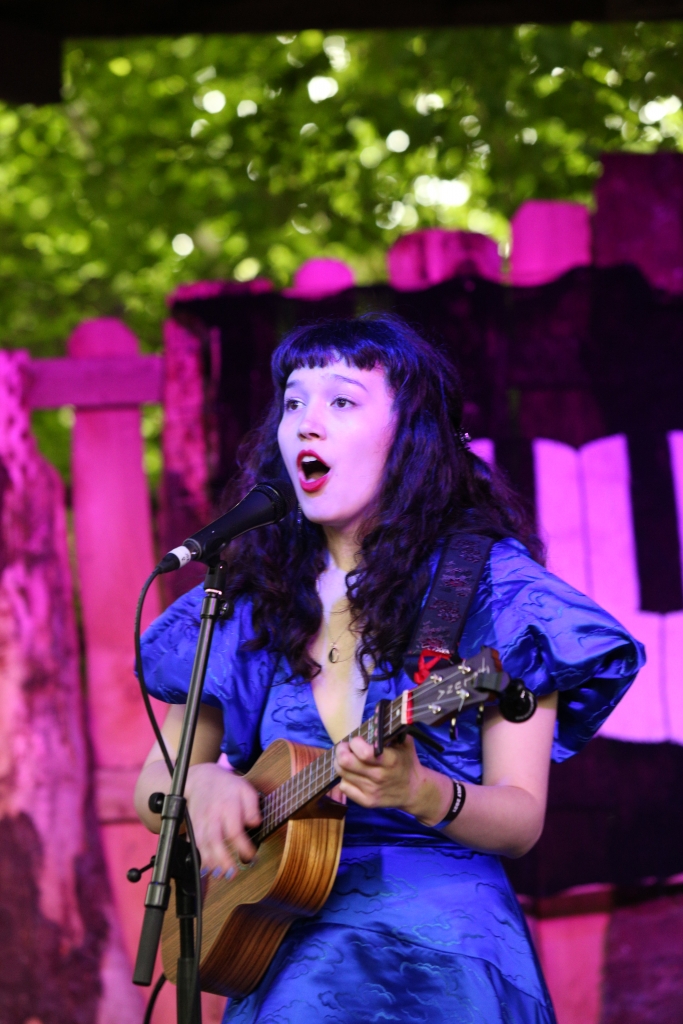 The new agenda is represented by ‘Always Back To You’ there is love and vindication and smiles. The sapphire costume catches the light and the wooden pilings around the stage make it look like a Rodgers and Hammerstein musical. Quite the achievement. Sasha says so long, farewell with her old fave, ‘Broken Vessels’, which already sounds like juvenilia. It’s moving along.

As with the Friday programme, there are occasional clashes between stage events. So we watch the start of Dani Larkin on the Stevie Martin Stage. It’s an important debut of the album and there are strings and percussion to accent the song-fables. ‘Aoife’ is all murmur and banjo and myth. Dani is reaching into the deeps of history to measure our own capacity for crowd-think and violence. Intense.

But we must also tramp down to Karma Valley for Jealous of the Birds, to hear ‘Blue Eyes’ exploding like a testy mattress. There’s a call-out to Kafka and Kurt and then a request for some whistling support for ‘Goji Berry Sunset’. How would you refuse the privilege? Naomi takes an aetheric steer with ‘The Grass Begins to Eat Itself’. She calls down poetry and delirium, murmurations and washing lines. 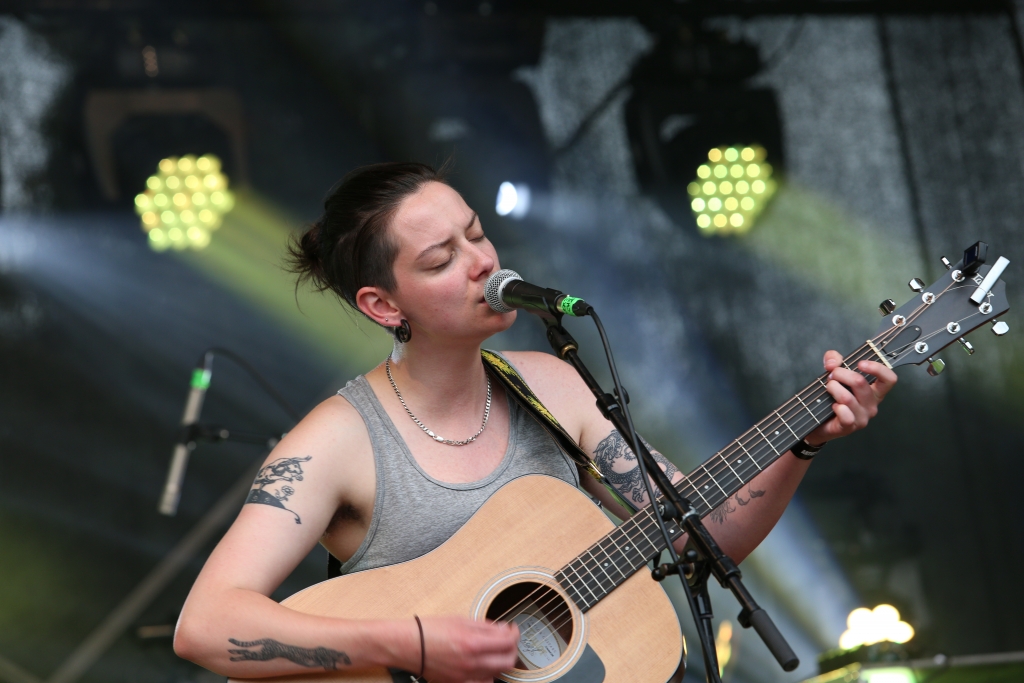 Cormac Neeson plays out from his White Feather record and a few tunes from The Answer. “Let’s just never leave here,” he figures. Nearby, Reevah is at the Henry McCullough stage with a coral blue Fender guitar, setting ‘Daydreamer’ free, a measure of sorrow and poise and spirit of Stevie Nicks.

General Fiasco is a throwback to Glasgowbury Festival and four consecutive years up the Sperrins, 2007-10. For many here, the band was part of their summer rites and so there’s an orderly queue of baby buggies by the stage as the adults get their nostalgia. The songs have weathered decently and the time-coded message of ‘The Age You Start Losing Friends’ is sadly prescient.

Joshua Burnside was a low-key wow on the Friday bill but he gets his proper billing on the Saturday. At the risk of repeating ourselves let’s say that Josh is premium talent with bonus laughs, philosophy, ramshackle parts and endearing self-sabotage. He’s learnt to play the violin over lockdown and it’s a fun element in ‘Nothing for Ye’ – that mocking admission of the poor creative.

But hey, those songs. Allegorical and potent. Strange like old woodcuts. ‘War on Everything’ is fear and disturbance. ‘The Good Word’ is endlessly absorbing. The dream sequence when the robots are in the jungle is the greatest. For the second time in the weekend we hear ‘Whiskey Whiskey’ and the stomach flips, again.

And So I Watch you From Afar are the chosen ones to finish at the Karma Valley Stage. They have the credentials of punk, community, DIY and illuminating tunes. We watch them though the hazer clouds and magenta lighting. Rory looks back at us. A question: “we all made it ok?” 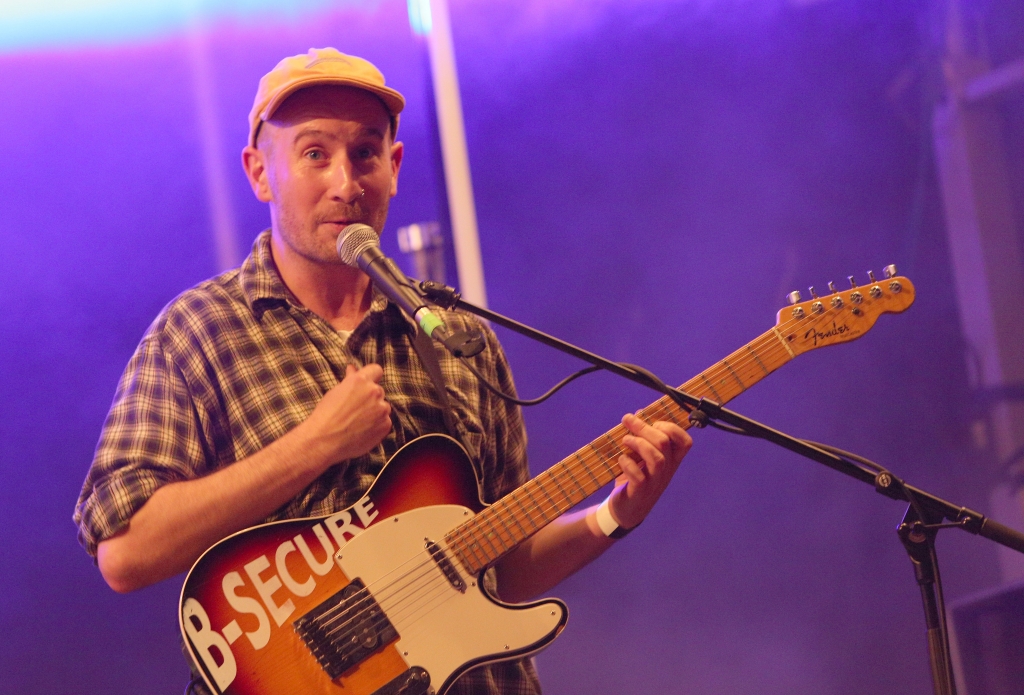 That’s a lot of stories and a lifetime of conversation. But we appreciate the sentiment. Rory has his own response, though. It hinges on two pieces. ‘A Little Bit of Solidarity Goes a Long Way’ is a reminder of how things were in 2008. The music scene was pulling together but the economic crash was imminent. The banking system was busting us yet music was holding firm, sustaining our hearts. And that tune will always be a guide to collective action and the affirming value of the arts.

The stage lights go emerald and they play a new piece called ‘Years Ago’. Like ‘Solidarity’, it takes an emotional arc and tonight at least, it sounds like a bookmark to that earlier work. Two periods of difficulty, both affixed to significant music. ASIWYFA are thanking the Stendhal festival organisers, the stage crew and the people at Help Musicians NI who have done so much to uphold the local scene. They thank the audience also, because they have stayed true. Finally, they play ‘Big Thinks Do Remarkable’ and the lines sound reassuring. Darkness may yield. We’re beginning to see the light.

All images by Stuart Bailie