The 19-year-old says that she’s absolutely voting Green. Moments later, a 92-year-old tells them she will read the party leaflet and have a good think about it. These doorstep reactions are noted on the campaign sheet and to the team moves from Kingsway towards Parkvue Manor and potential victory. Electioneering is on.

The cherry blossoms are out in Cherryvalley and Brian Smyth is lathered in Factor 30. He’s taken three weeks away from the day job as a youth worker and his mission now is to be elected as an MLA in East Belfast. Support for the Greens in this area is typically 10%. To take a seat in the Stormont Assembly, he will need around 13% support. Brian believes he can reach it. 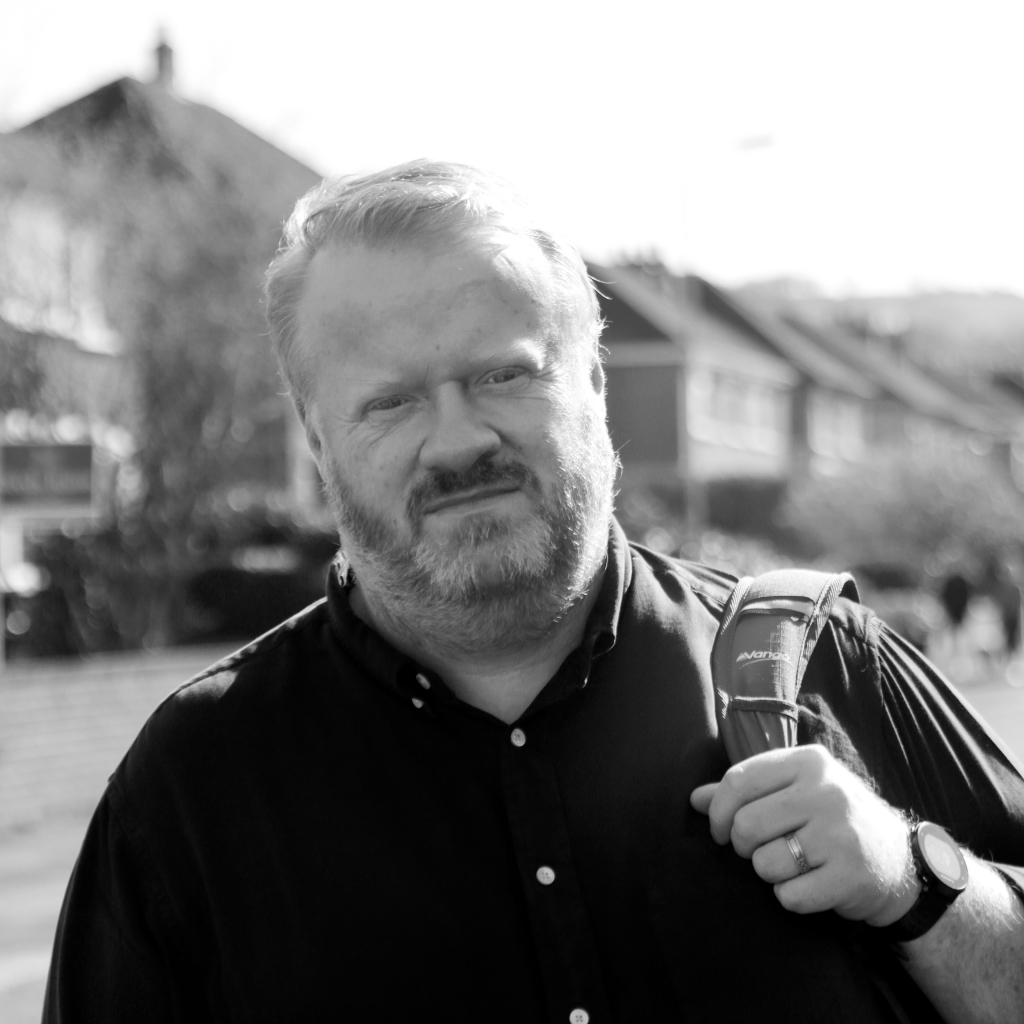 There are almost 40,000 doorsteps in East Belfast and Brian is planning to reach 23,000 of them before polling day on May 5. Tomorrow, Sunday, is Short Strand and about 18 Green volunteers are coming up on the Dublin train to help with the canvassing. Today is Gilnahirk, where the privets are tidily snipped and the voter base is mostly Alliance and Unionist. Some of the voters are already decided, so the conversation tilts towards their transfer choice on the ballot. Other households are nauseated by local politics and the tribal noise. Many of them are fit for a change.

This is how you see Brian work up his hidden power as a persuader. He talks to the schoolteacher about apprenticeship schemes and how we might grow alternative skillsets. He relates to another about the NHS and lets her know that he works in the care system. He’s painfully aware of the impact of cuts, neglect and privatisation by stealth. At another driveway, a detractor is angry that his diesel car will be scrapped, but Brian talks timescales, strategies and the welfare of his grandchildren. 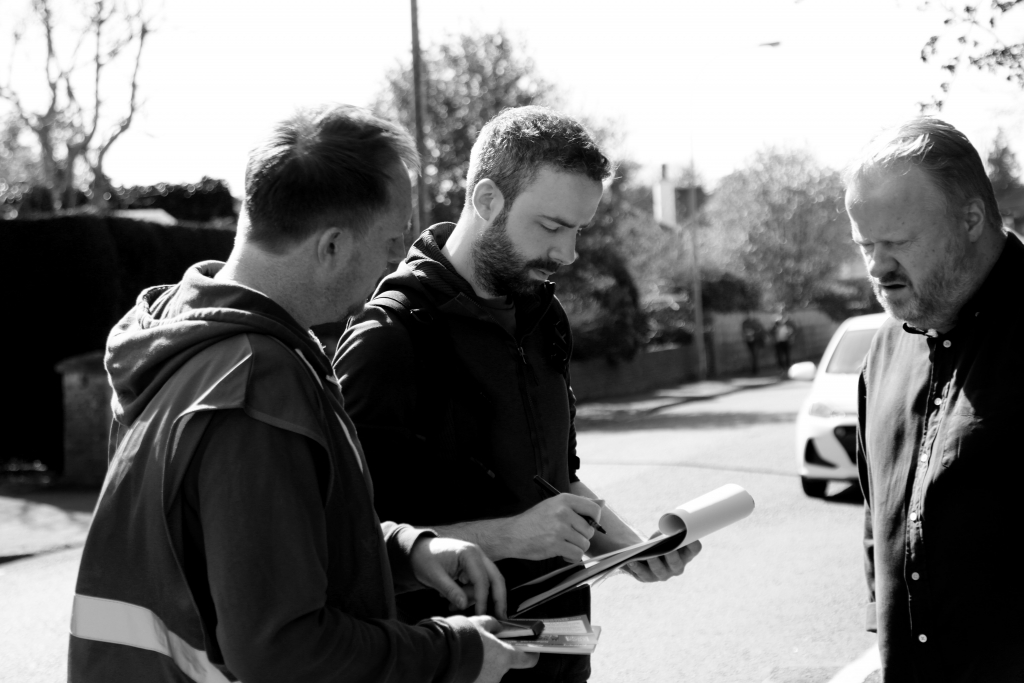 The Jehovah Witnesses down the road say they’re sorry but they aren’t allowed to vote. But they know all about the door-to-door evangelism and wish the team a useful day. And so the eight activists continue to fan out down the street. Brian has the sweeper role, edging into a conversation that shows promise. Recently a guy answered the door in a New Order T-shirt and so Brian kept up a conversation about the band’s early albums. “And the guy turned around and said, ‘I’m gonna vote for you’. Brilliant.”

Then again, when Smyth travelled over to the COP26 climate change conference in Glasgow, he wore a T-shirt with a painting on it – A Basket of Roses by the French artist Henri Fantin-Latour. This art had famously guested on the cover of the second New Order album, Power, Corruption & Lies. He wore this in the company of Andy Burnham and the Metro Mayor of Liverpool, Steve Rotherham. “People picked up on the T-shirt. They said, that’s very subtle.” 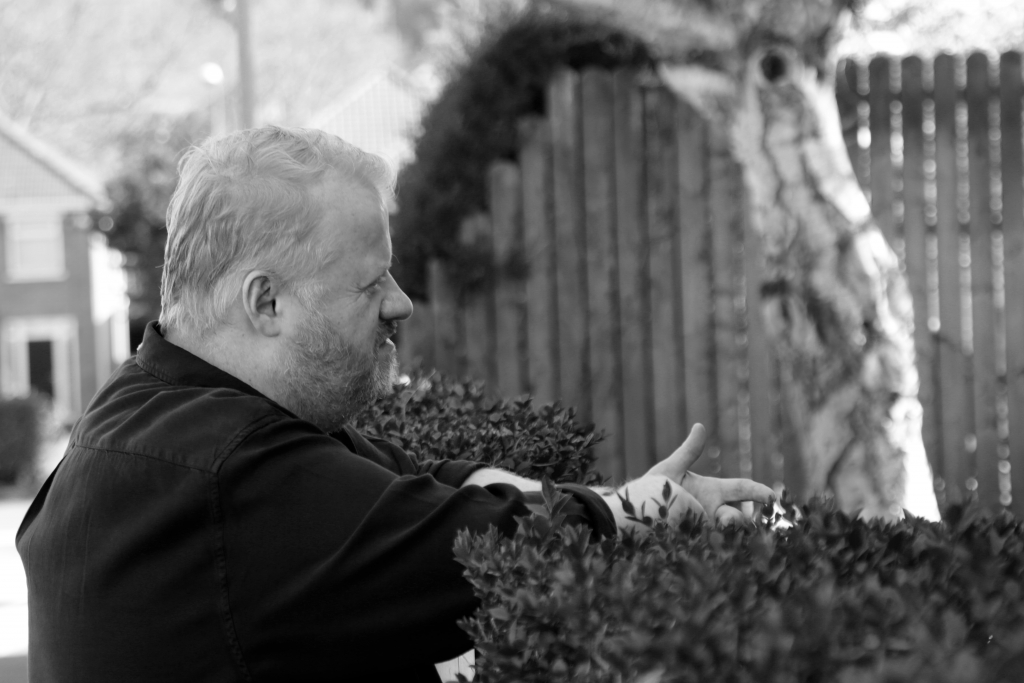 Back in Gilnahirk, only two people have asked about the Northern Ireland Protocol. But the same number have wanted to talk about the issues around assisted dying. And when he went around the houses in Downshire, Cregagh, there were three conversations about Brian’s previous history as the singer of Dirty Stevie.

Brian, you see, was a rock and roller in his youth. Raised in the New Lodge, north Belfast, he played venues like the Front Page and the Pavilion. He was feeling supersonic and would not have refused a gin and tonic. Dirty Steve played lurching Britpop and their single ‘Do You Wanna Have Sex With Me’, was briefly notorious on the local scene. Brian (aka Smitty), duked it out on the online message boards, chiefly with the musician Barry Peake. Some of the arguments felt like outtakes of the famous Spinal Tap query – “what’s wrong with being sexy?”

Brian laughs when I remind him.

“We were all in our early 20s. We hadn’t a clue. It was just a big, dumb, loud, punk rock song. But people loved it. To be honest with you, I ended up in a band by accident. One of my mates said, you can sing. You can actually hold a tune. Do you wanna be in our band?

“I’d always wanted to be in a band. But you know that working class mentality in Belfast that you can’t be in a band? I remember boys going to me and saying, ‘that’s gay’. I’m going, ‘what the fuck’s gay about rock and roll? And even if it was, who cares?’ There’s something about that working class culture which is almost a wee bit fearful. But I genuinely loved it.”

So was there a particular fork in the Smitty career path?

“I’ve always been political. If you had said to me in my late teens, ‘would you have been involved in music or politics?’ it would always have been politics. I’ve always been interested in that alternative culture, whether it’s been music or football. The subculture around music and football have been massively important in my life. In terms of helping me work through my identity ­- who I am and just sending me down different routes.

“I know I get a lot of stick about Oasis, but I get it. I say to people, Oasis weren’t my favourite band, but they were the most important band of my life. Because Oasis opened the door to other stuff. People can knock Oasis and deride them, but they were the same as punk. They were sending a generation of kids onto somewhere different.”

Previously, when Dig With It asked Brian about his all-time playlist, he talked up Afghan Whigs, Public Enemy, Queens of the Stone Age, Lauryn Hill and Stiff Little Fingers.

“There’s a jukebox in my head, all day, when I’m walking around. And I’m seeing it with my own son now, ’cause I’m playing stuff to him and see how he’s loving stuff.” 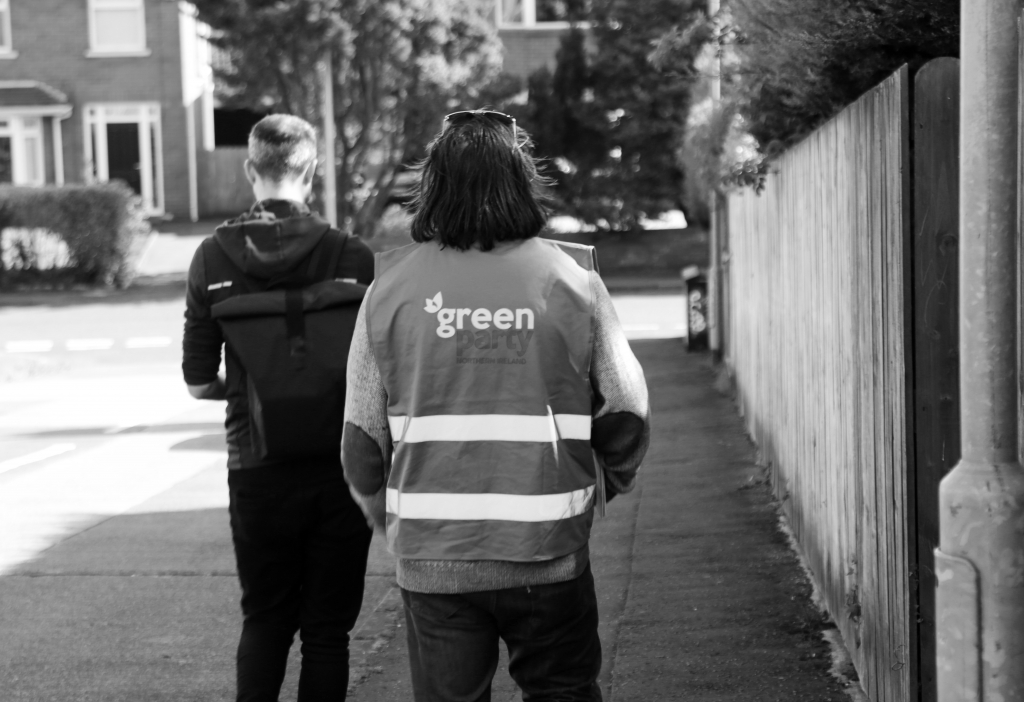 Brian plots out a connection between politics and his previous gig.

“Being in a band, if you wanna go places, sometimes you’ve just gotta put yourself out there and brassneck it. And just go, ‘this is who we are and what we’re about’. It’s almost the same with politics, particularly when you’re one of the smaller parties, like the Greens. You’re gotta go and sell a vision. It was the same with Dirty Stevie. You learn to communicate with people.”

His campaign manager is Anthony Flynn, Green Party councillor for the Ormiston District. The plan is that ideally Brian should spend 30 seconds in conversation with a potential voter and two minutes maximum. But this candidate is garrulous and so the minutes stretch out. He smiles after a lengthy meeting on the threshold. “We’re upbeat and relentless.”

Smitty is currently serving as a Green councillor in the Lisnasharragh DEA. When he said he was standing as an MLA, the political class wrote him off. But by degrees, he has become an actual contender. He is putting out exceptional energy in an election that seems under-charged. He has apologised for “crass tweets” in the past. “I was very much part of the male toxicity that exists, but hope I’ve learnt and grown in the following years. Sorry for being a dick.” Meantime, the Greens are working above the rotten crust of sectarian politics of the north, demanding a proportional slice of media coverage and impacting strongly on assembly business. 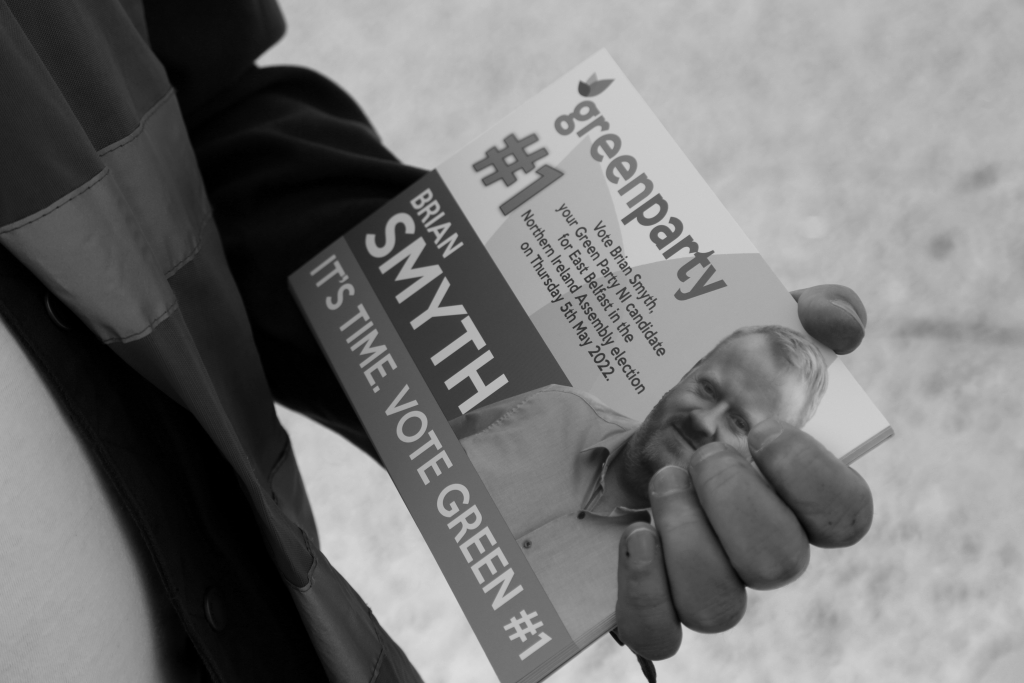 “The other parties are worried,” Brian says, swigging water from his flask. He has reason to say this. The fifth seat in East Belfast is no longer a done deal for the usual incumbents. So he’s got two more streets to persuade before the Saturday plan is all ticked off on the masterplan.

His Saturday evening will include a visit to the Banana Block on the Newtownards Road and a Free The Night discussion. It’s not an easy schedule but Brian Smyth will not relent.

He’s gonna roll with it.