Axis Marks The Spot: The Road To Bella Pacifica 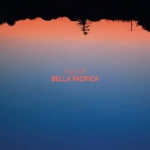 Ewen Friers recounts the fraught story of Bella Pacifica, the third album by Axis Of.

In early 2016 I sat on a Provence-bound flight, awash with a strange feeling of relief, sadness and optimism. With the sweat on my forehead barely dry from the show the night before at the Limelight, I had rushed the Axis Of gear to our lock-up on the North Coast and closed the door on it for good before heading to City Airport, waving goodbye to Mr Tayto and heading for sunnier climes.

After eight years of making records, endless touring and years of constant hatching, scheming and planning, with a band that defined the lives of its members since our school days, we were calling it ‘quits-ish’. And whilst my immediate relocation to the south of France, subsequent travels and eventual jumping onto tour buses as a crew member for other bands was both a cheesy cliché and a fun distraction from the pain of halting Axis Of, it wouldn’t be long before the “not-being-able-to-keep-away” effect, that most creative types feel, appeared in both Niall’s and my life. 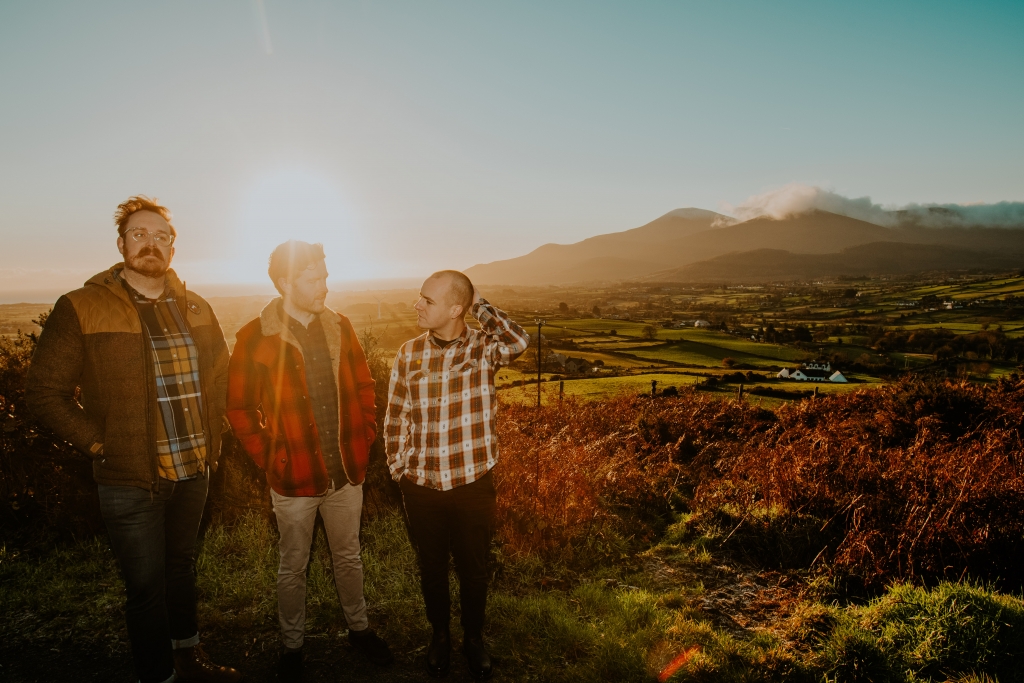 For me, this manifested in CATALAN!, a project that allowed me to explore some uncharted musical landscapes, work with some disgracefully talented people, do some exploring of our own and culminated in the release of my debut, Veritas in 2020. For Niall, the creative spark awakened at his new home in British Columbia and as the months and years rolled by a trickle of demos found their way from his snow-covered cabin to my inbox. Without any specified deadline or ambition we worked away fruitfully, I added lyrics and vocal ideas, Niall largely in charge of the music and experimenting with production.

In another version of the story this might be the sum of the tale: we made a transatlantic record and, with the help of technology, created an album that would have been logistically difficult to write when we started all those years before. And that small triumph might have been it. But sadly, that’s not where this story ends.

Just when the demo trickle was turning into something more akin to a stream, Niall’s health began to mysteriously deteriorate. What we later discovered had stemmed from an innocuous fall and concussion, turned into a slow, protracted mental health episode that would see him move home, battle with heavy medication withdrawal and cruelly steal almost two years of his life.

Unable to work, socialise or leave the house for weeks at a time, Niall’s downward spiral encompassed every conceivable and torturous feature related to declining mental health. Anxiety, depression, disassociation, a complete scrambling of senses that left Niall utterly broken both mentally and physically. I’m not qualified to speak on mental health issues and ultimately it’s Niall’s story to tell. I can only reflect on what I saw as I started to make regular trips to visit him in Newcastle. I had had little experience or understanding of just how stark this kind of event could be and was traumatised as I witnessed my closest friend, someone who I’d had a lifetime of travel and creative collaboration with, completely debilitated and quite literally on the edge of survival. 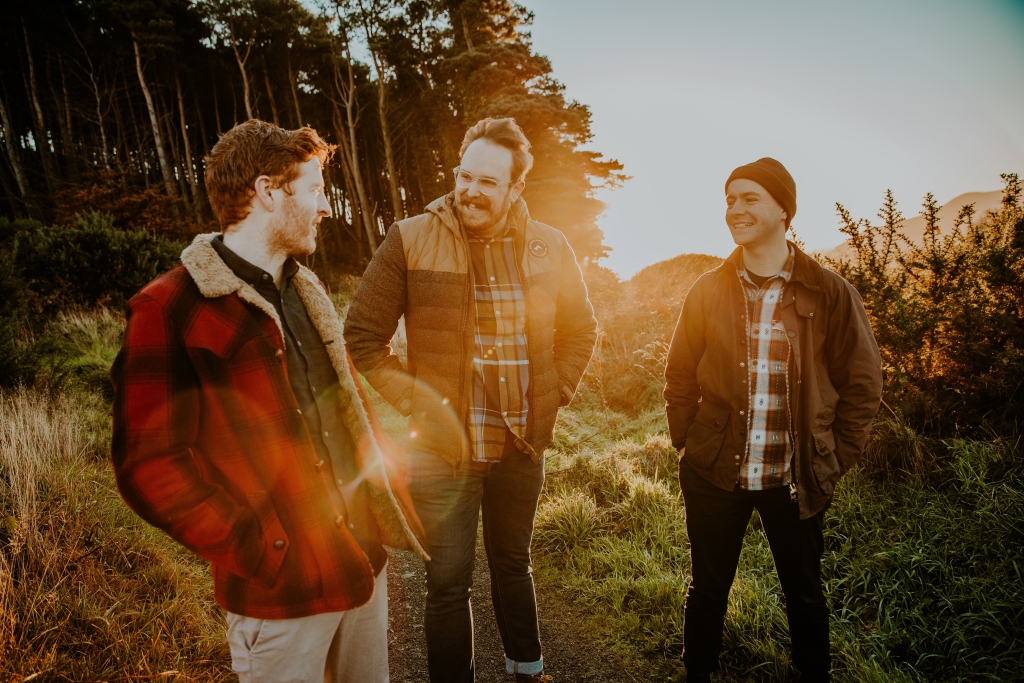 Axis Of by Ciara McMullan

I can’t overstate just how shocking it was to visit Niall in a bed-bound and enfeebled state. I’m conscious that this is strong language and I’m not trying to over-dramatise or exaggerate just how terrifying this was for me, Niall’s girlfriend Sinead, his family and friends let alone Niall himself.

Mercifully, after endless months of troubleshooting, patience and monumental endurance from Niall, the symptoms gradually began to lift. Extremely slowly but steadily, he was able to reclaim elements of what we might call a more normal life. While sick, Niall hadn’t been able to play, write or even listen to music. He’d lost the coordination required for guitar playing and the sound of a band or even the computer screens of demo session would have been over-stimulating. So when Niall finally showed me some new ideas he’d been adding to the then-neglected pile of songs it felt like another enormous step for his recovery.

With each improvement came confidence and over the next year a series of shifting goal posts saw conversations of, ‘we should work up these demos’ upgraded to ‘we could make an album’. By the end of 2019 an enthused Niall, now almost fully recovered, was buoyantly leading the project and had booked us into the decidedly Axis Of apt Black Bay Studios in the Outer Hebrides.

Then in an earth-shattering turn, days before we headed up the studio we lost our close friend Andrew Dunbar. To have been hit with such a tragedy, losing a close friend, but also someone who had played such a crucial role in our band (even performing with us onstage at that last ever Limelight show in 2016) was excruciating and spending the following weeks, recording songs charged with reflections on mental health struggles was profoundly appropriate in a way.

Black Bay Studio lies on the western edge of Lewis on a tiny island called Great Bernera. Storms raged for the duration of our stay and with what felt like only a couple of hours of sun light each day complete immersion in the recording process was our salvation. With the help of Pete Fletcher, Chris Wee and Ethan Harman, we worked through increasingly relevant songs of struggle, pain, challenge but thankfully peppered with echoes of hope and optimism. 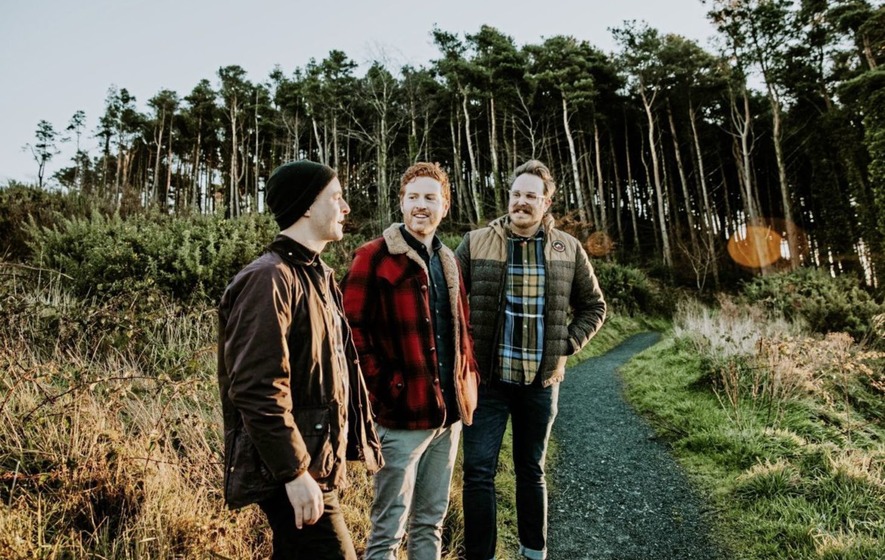 Axis Of by Ciara McMullan

With a few free hours on one of the final days on the island, we drove out to the towering western cliffs and in a brief moment of blinding winter sun in the cloud breaks, we spotted the island of St Kilda as a dot on horizon. We had named our first record in its honour in 2013 and there was some weighty, philosophical hopefulness in finally “Finding St Kilda” after all this time.

With a finished record and increasingly improving possibilities as Niall continued to recover, we decided on releasing the album publicly, we sent it to some labels we admired and even spoke about playing live again, something completely unthinkable months before. With a renewed sense of achievement and possibility the chronological counter brought us the global pause button that was a new virus called Covid 19. This is a trauma everyone experienced and understandably the album plans were halted. There was particular worry about Niall. Any added pressures, a global health crisis for example, would surely be acutely felt by those in a state of recovery or fragility. But he endured, he even continued to improve. Perhaps it’s a stretch, but as the lockdowns trundled on and we eventually started to look at album plans again Niall really used Bella Pacifica as talisman of sorts, I believe that working on mixes, artwork, design and video stuff was a rewarding distraction in the turbulence.

It’s strange to reflect on the story of this particular album now that it is actually out, being listened to and interpreted by other eyes and ears out there. When I think back to all the confusion and fear, all the pain and resilience that we instilled in the songs, it’s satisfying to accept that the success of this record is that it exists at all. It’s completely distinct to any other Axis Of record in that sense. Rather than us being focused on where the train is headed, so to speak, it’s more about where it’s been.

No one mythologises a band quite like its own members and it’s not often that you get to pen your own write-up, but I am astonishingly proud of this record. When I headed to France in 2016, my entire adult life until then had been about Axis Of and I beamed with pride for all the white knuckle DIY tours, sessions, albums and playing shows with our heroes across Europe.

But with Bella Pacifica there’s a deeper, arguably more important achievement. It hints at something more powerful or existential, something I’m not educated enough in to fully understand. When all is said and done, there is pain but there is hope and as we come out of the pandemic it seems to be a sentiment that is resonating with people. And so here I am restringing my beat-up Fender Jazz for a show in a few days in the Limelight of all places. Come along and celebrate those sentiments with us.

Axis Of play the Limelight Belfast, on May 20 (with Brand New Friends and Big Daisy), then Whelan’s, Dublin on May 28.