It must be 1978 and I’m in English class with Frank Ormsby. This is a good thing. He will enthuse about Louis MacNeice and TS Eliot. He will share our dismay as we read about Tess d’Urberville and her trysts with the eternally wet Angel Clare. Frank has thick rimmed glasses, a fringe and a Fermanagh accent. Sometimes he bins the syllabus and reads us lesser-known Irish poets or he fetches something out of The Honest Ulsterman, a publication that he’s edited since 1969.

These moments don’t do much for our exam capacity but we like it. Frank gets into raptures over the words, the style and the sentiment. When he’s like this, he’s barely conscious of his pupils. Next, he picks a moment in a story about a devout student who levitates during an exam and has to resort to filthy blasphemy to descend. We laugh forever. Our systems have been altered by punk rock, Embassy Regal and Mundie’s Wine. Our limbs are solid with excessive time on the sports fields. We can parse any number of Latin verbs but we can barely talk to a woman. We think Frank is OK.

Still, we can’t abide The Mill On The Floss. Too many bonnets and Nineteenth Century irony and mithering events in Lincolnshire. And it never ends. So Frank stages a rescue mission. With great solemnity he tells us to turn to Chapter VII. He selects the following line about fake coiffure:

“Mrs. Glegg had doubtless the glossiest and crispest brown curls in her drawers, as well as curls in various degrees of fuzzy laxness.”

We miss a beat and then guffaw at the rude entendre. It is the only part of the book that we will ever recall.

Decades before, the Royal Belfast Academical Institution must have been a lofty place. But in the Seventies it is brutal, semi-derelict, and smeared with cynicism. The windows are checkered with Sellotape, the better to catch the glass shrapnel of a city centre bomb blast. Many of the posh kids have been sent elsewhere and standards have crashed. Hard men pummel the First Formers in the quadrangle and rogue traders steal albums to order from Boots The Chemist. Everyone is in a trauma of sorts. The Principal wears a gown and a mortar board to assembly but he is colossally unpopular. His haters carve ‘Stuff Stan’ into the desks with hunting knives and burn the same legend onto the front lawn with paraquat. When we watch the Lindsay Anderson film ‘If’, we shudder with recognition. We half expect to see machine gunners of the roof of the ‘N’ Block as the Combined Cadet Force finally take the vapours.

Hey, we survived. The exam results became irrelevant, but the Ormsby legacy was an abiding love for the words. That’s what a proper teacher gifts you. And now here’s Frank onstage at the Ulster Hall in 2015, celebrating the work of Michael Longley who is getting his freedom of Belfast. Frank makes a bunch of jokes about his friend Michael and his inferior standing to his wife, Edna Longley. It is fun relief from the ceremony. Frank hasn’t lost the comic pace. Also, you can tell that there’s an immense connection between the two poets. They held the line during those perilous decades, verse against violence. Michael is getting his dues on the stage but he turns his speech around to remember Heaney and Hewitt and those absent rhymers. This has become a Longley trait as he says his valedictions and honours the comrades, the ancient, damaged trees and even a poet’s home, felled by a wrecking ball. The stage lights catch the platinum of his beard and he looks like Papa Hemingway, granddaddy of the soul.

Michael is talking about jazz and Atlantic Records on High Street where the late Solly Lipsitz fed the ears of himself and a young Van Morrison. Music saved them and it brought these two magi together earlier in 2015 for the launch of Van’s ‘Lit Up Inside’ collection. It was such a deal to see them onstage at the Lyric and I would dearly like to revisit Longley’s sonorous reading of ‘Into The Mystic’ and the mention of the muse and of rocking her gypsy soul.

Back at the Ulster Hall and it’s a weighty conferment. Michael D Higgins gives it the Presidential imprimatur. Another man of letters, at large in a city that can’t agree on the value of art. For tonight, the hostilities are suspended and Michael calls in the pianist, the traditional singers, the painter and his good mate Frank. 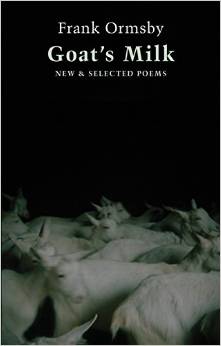 Two nights later and it’s Longley’s turn to introduce Ormsby. This takes place at the McMordie Room at Queen’s, where Frank’s collection, ‘Goats Milk’ is launching. There is talk of their famous meetings at the Crown Bar, over pints, bangers and mash. Michael relates this with Bunter-esque relish. In his day, RBAI was probably more Greyfriars than Colditz and this old pupil will always carry that era with him.

Both of these guys lost some of their middle years to the day jobs, what Longley calls “the toxins of the bureaucratic life”. But now they are writing with urgency, itemising the beautiful and the fragile. Frank bookends his readings with poems about cremation. Firstly, a glimpse of human smoke above Roselawn Cemetery and finally a mediation on his own ashes, possibly contained in an hour glass, or perhaps stealthily sprinkled from a Waterstone’s bag on the front lawn of Inst. A better declaration than Stuff Stan, for sure.

The transient voices of the American soldiers still resonate through ‘A Northern Spring’. Frank’s mother is elsewhere with her pitchfork and his old father is laid out for his wake, attended by superannuated mourners on bicycles. Frank doesn’t quite have the poise and the declarative powers of Michael, but the power is on the page and the humanity is true.

There’s a brief chat afterwards and I mention the time that he clipped a sleeping classmate about the head. Unfortunately, the pupil jabbed his head backwards onto the spindle of a radiator and there was blood everywhere. It was quite the incident and Frank cringes at the memory, wishing to apologise to Mark Rutherford, wherever he might be. For my part, I’m wishing to say a sincere thanks to Frank for that inheritance of words and rapture and literature. However, we are too bashful for such a discourse and must settle instead on smiles and goodwill and the slapback of poetry about the walls.